For MONTHS now, I have not been able to escape seeing videos of this San Sebastian cheesecake. Every single time I would open Tiktok, I would see someone going all the way to Turkey to try it.

I tried to ignore the videos and I also gaslighted myself into believing the cheesecake won’t even be that good….I WAS SO WRONG. This is officially my favourite kind of cheesecake. It’s so light and creamy! 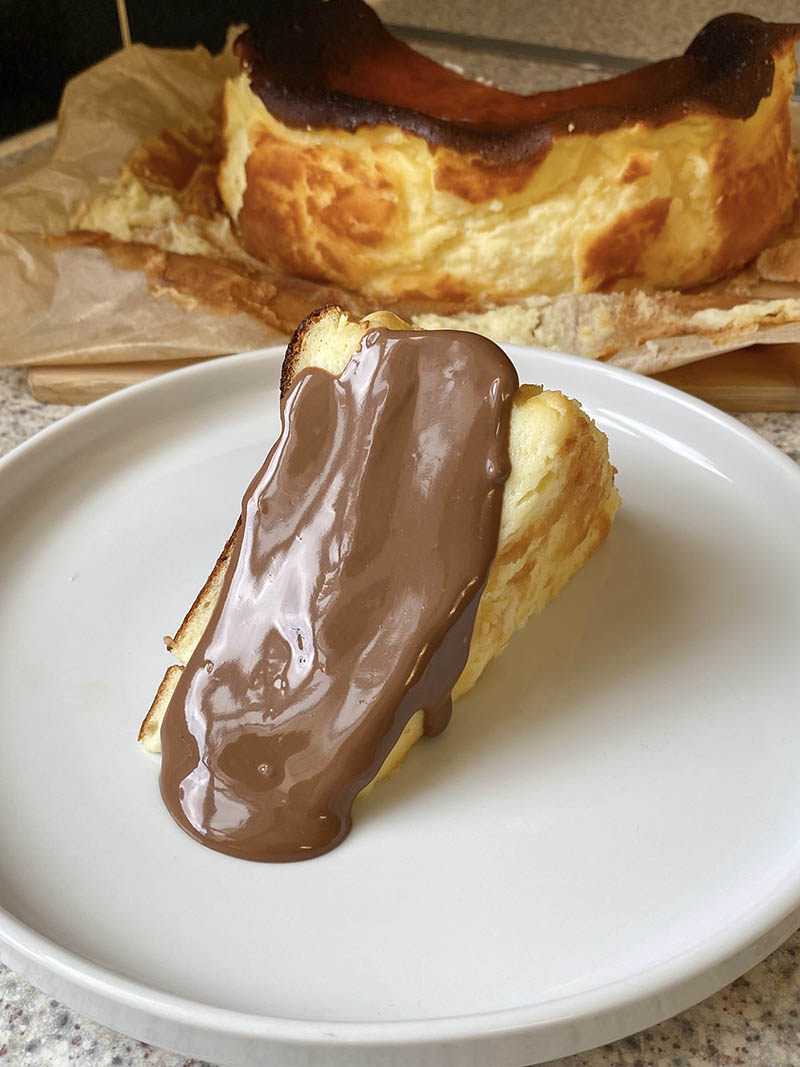 What is San Sebastian cheesecake?

San Sebastian cheesecake (also known as burnt basque cheesecake) is a cheesecake that is so much more lighter and creamier than the ones we’re use to eating.

The main difference between this and the cheesecakes we normally see is the creaminess of it, but also the top of it is burnt. In a good way though.

The burnt top adds a caramelised flavour to it which makes it taste so good!

This cheesecake did originate in San Sebastian, Spain. However, I feel like it became extremely popular on social media over the past few months because of a restaurant in Istanbul, called Viyana Kahvesi, that happens to sell it with melted chocolate poured on top.

I have seen so many people go to this restaurant just so that they can try this cheesecake! 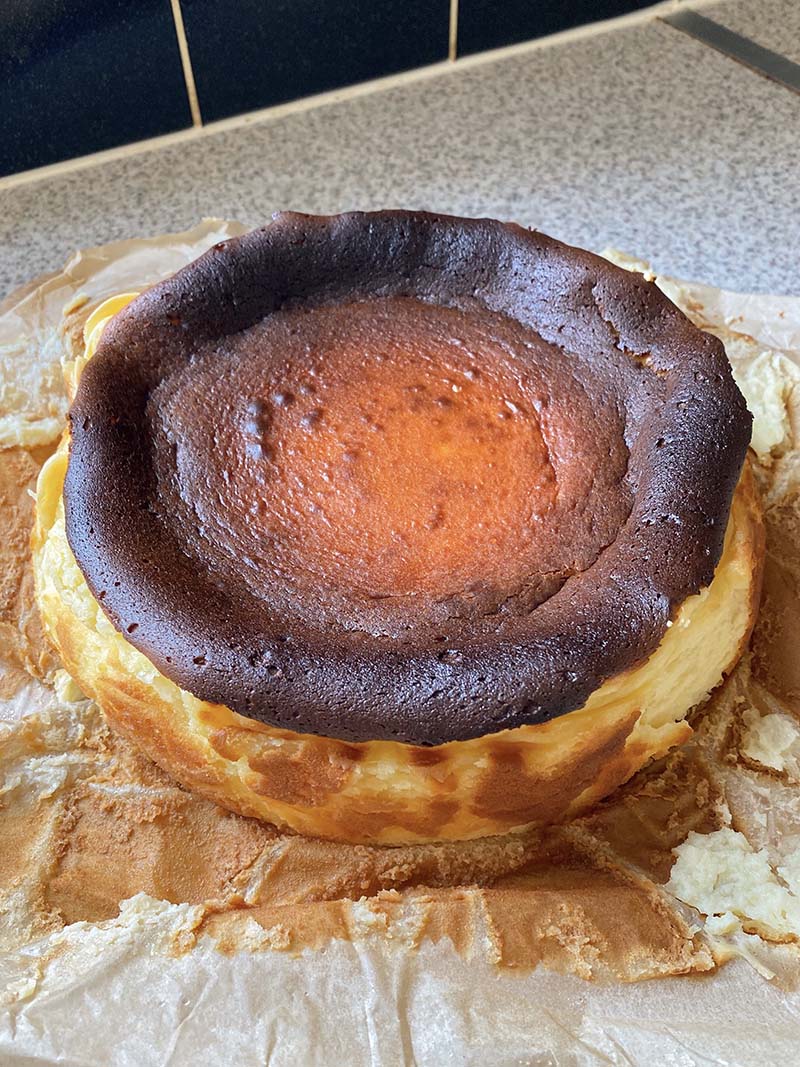 The way you bake this is important to the texture and look of the cheesecake. So here are a few tips:

Traditionally, this cheesecake has more of a rustic look. So typically, you would add a circle of baking paper to the bottom of your tin.

However for this, instead just get a large piece of baking paper and just press it down into the tin. The baking paper will fold and have wrinkles in it, but this is the look we’re going for.

This doesn’t effect the way the cheesecake bakes or tastes to be honest, it’s just mainly for the looks!

Don’t bake it for too long

You’re gonna bake this cheesecake for around 40-50 minutes. It is done when the edges are set, but the centre is still quite jiggly.

If the centre is fully set, it won’t have the creamy texture we want. So keep an eye on it.

If you’re unsure, it is better for it to be a little underbaked, than over baked.

What to do if your cheesecake hasn’t burnt on top

This cheesecake is baked at a higher temp so that the top of it is able to burn. However, every oven is different. After 40 or 50 minutes, your cheesecake might still not have that burnt look.

That fine! But don’t leave it in the oven waiting for the top to brown more. You will just end up over baking it. Instead, put it under your grill. If you’re American, I think you guys call it a broiler.

Just put it under there for a few minutes. Keep an eye on it though, it will brown very quickly under there. 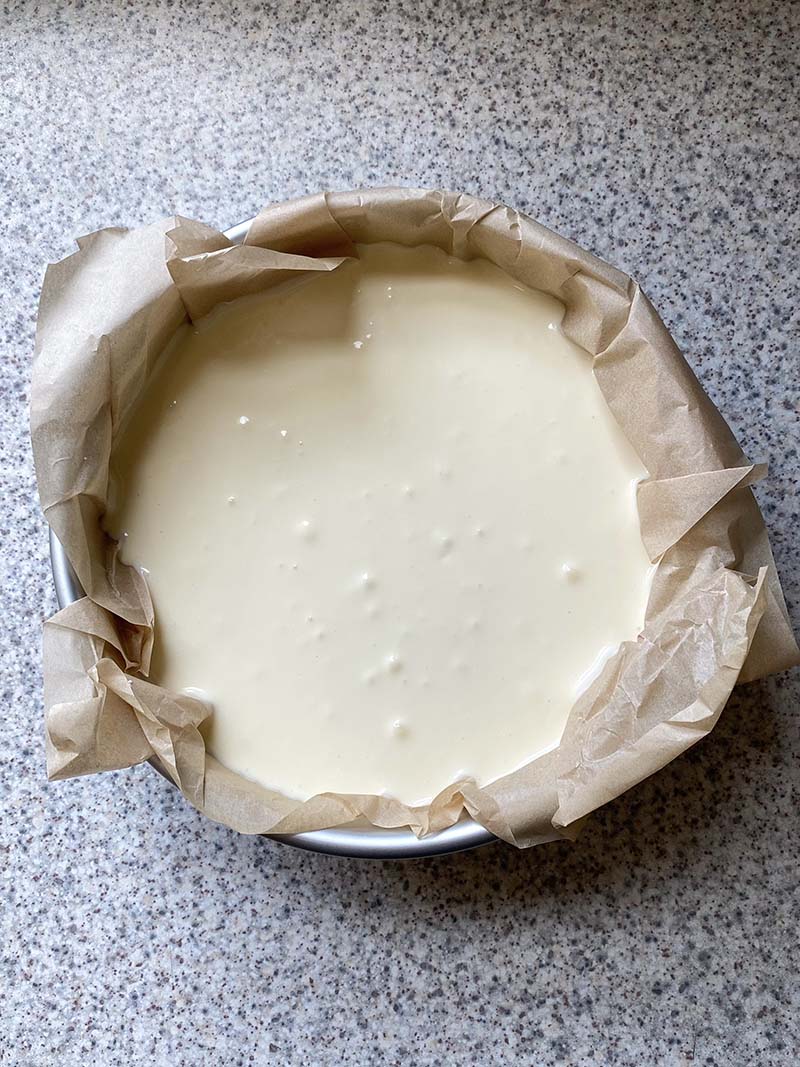 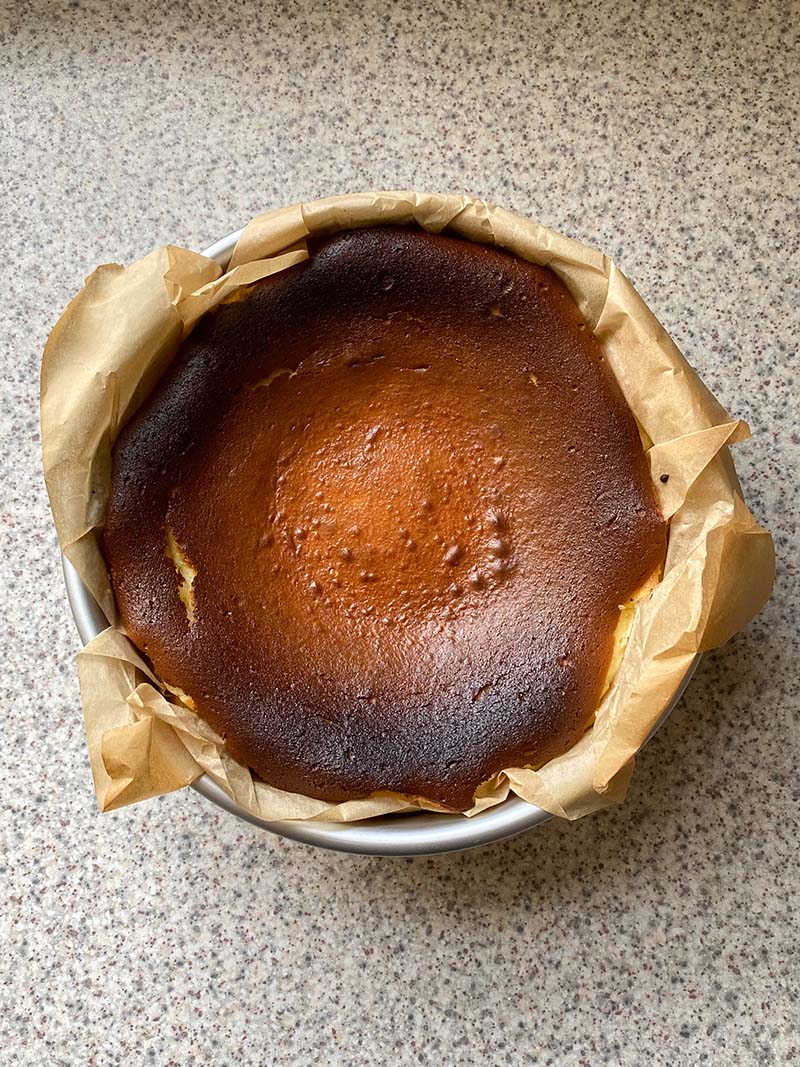 This recipe has some corn flour (or corn starch) in it. You could also just use the same amount of plain/all purpose flour instead.

I also added some plain yoghurt to this. This helped a little with the creaminess, but it also added that tangy flavour that cheesecake has.

I tried it without the yoghurt and I didn’t love it.

You could use greek yoghurt or even sour cream instead.

This was just for some flavour, you could leave it out if you want!

I tried doing some research to see if this cheesecake is served cold or at room temp. Because a lot of the videos I was seeing, the cheesecake didn’t seem like it was straight out of the fridge.

My research didn’t help, I found a lot of different opinions.

Some people have it cold, some at room temp, and I also some recipes that say it is good if you warm it up a little.

So naturally, I tried each way. They all taste great, so it is just up to you.

Just make sure to let the cheesecake set in the fridge for a few hours, before taking it out of the tin and cutting. It is underbaked when you take it out of the oven, so it needs time to set before cutting.

END_OF_DOCUMENT_TOKEN_TO_BE_REPLACED 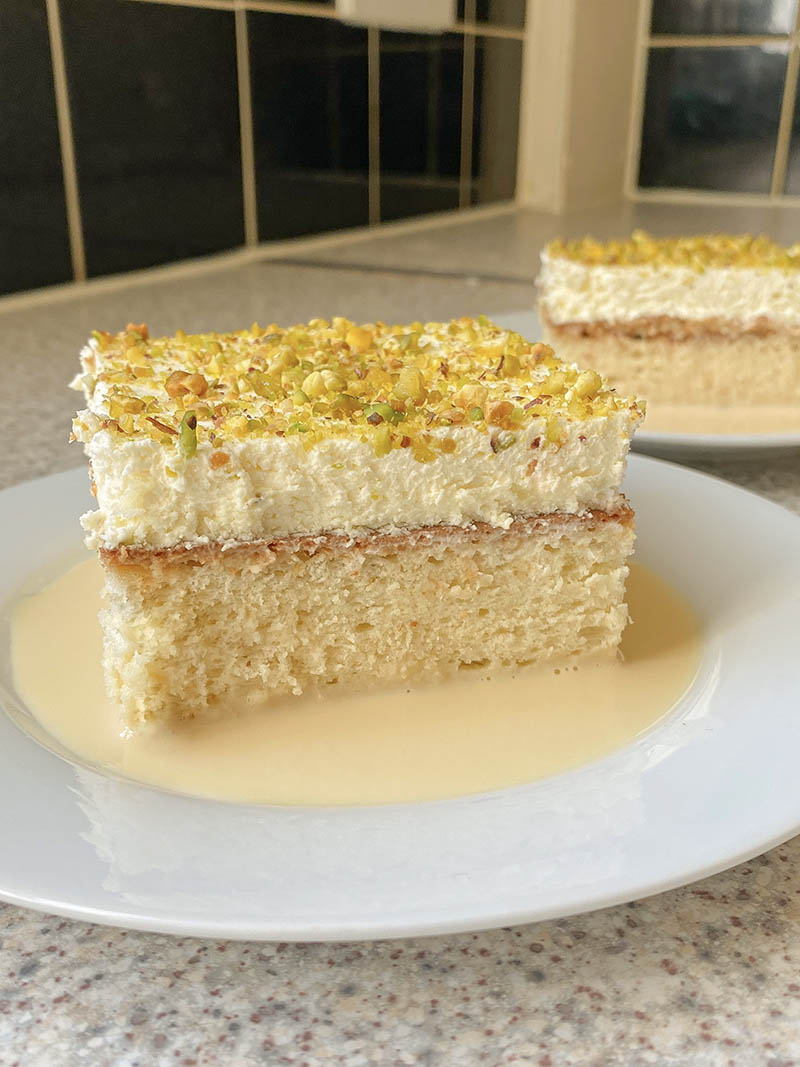